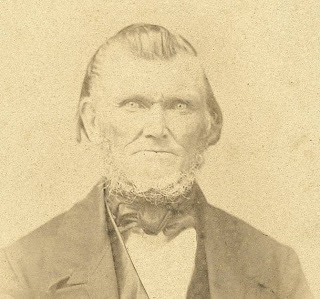 
Thus Ends the year 1863. Joseph the Prophet said whoever lived to see 1860 would live to See the Commencement of the downfall of the United States.
The Union was dissolved in 1860 & Civel war Commenced which has raged Ever since & the Land is beginning to be bathed in Blood & will Continue untill the words of the Prophet will be fulfilled. It is an important age of the world, and the Events of Each year are rapidly fullfilling the words of all Prophets since the world Began.


Thus Ends the year of 1865. Praise be unto the Lord our God for he has Comforted Zion and sustained his people Israel. He hath thwarted all the Evil devises of our Enemies against us up to the present time.


...Thus the year 1866 has Closed, past away, and gave and bourn its report to heaven of all men & Nations. 1860 & 66 have been two years which many men have looked forward to as being periods of vast importance to the world. 1860 commenced the dissolving of the American Union. The Southern States seceded which was followed by a 4 years which laid in the dust two millions of men, who were the strengs, bone & sinnew of the Nation, and Cost the Northern States alone Four thousand Million dollars and left upon the world all the Evils which follow a Bloody Civil war.
... It seems as though there never was a more wicked & Corrupt Generation than the one [in] which we live. The whole Earth is ripened in iniquity and prepared for the damnation of Hell. Many of both people and rulers of this Nation are seeking to destroy the Church and Kingdom of God from off the Earth, and we are ownly preserved through the power and Mercy of God.
All Nations are preparing for war, and are fearing and trembling for fear of those things which are Coming upon the Earth. There is an awful uncertainty resting upon all Nations, but [they] do not know what awaits them.
... the Saints of God understand. They that are faithful are looking for the judgements of God to Come upon the wicked, and for the Coming of the Son of Man.  ...