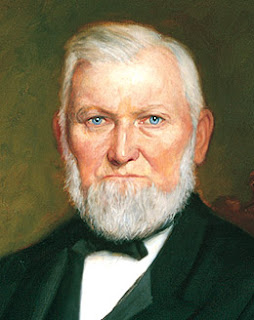 
...In 1889, Wilford Woodruff became the fourth prophet and president of the Church of Jesus Christ of Latter-day Saints.  Throughout his life he kept an extensive journal, and sometimes summarized his religious views at the end of a year.  Below are his reflections at the end of the year 1847 (to read his thoughts at other times, see here).


At the end of 1847, Wilford Woodruff recorded the following reflections in his personal journal:

Thus end annother Year which has been interesting and important year to the Saints. The Twelve Apostles with their brethren, one hundred and fourty three souls As pioneers have made A journey more than one thousands miles to the Rocky mountains And sought out A place for A city, A stake of Zion, And A Temple of the Lord that the saints may have A place to flee to while the indignation of the Lord passeth over the nation that hath driven them out.
Our Journey to the mountain, & back again to winters Quarters with Horse mule, and Ox teams has been over 2,000 miles. More than half of the Journey we have had to make new roads & with all of our exposures, sickness, & dangers[.  N]ot A Human life has been lost but all returned in safety. And what is more singular still, not A Horse mule ox, cow, or calf was lost either going or returning except 2 Horses shot by disobeying council.
The blessing of the Lord has been great upon us as A people during the past Year in all the various portions of the camp of Israel.
We have now found A place to build A Stake of Zion whare the people can gather toagether & build up Zion.
The past year has shown forth the fulfillment of Prophecy in the wars, rumours of wars, famins, Pestilence, distress of nations with perplexity And in many of the signs of the times. The United States in their wars with the feble Nation of Mexico have involved themselve in a debt of one hundred and fifty millions of dollars besides the loss of twenty five thousand men & twice that number to Mexico And their own expenses in the war.
The famine has raged in Ireland, the cholera through Europe. The breaking of Banks & merchants has distressed the people in England. The Baron Rothchilds the rich Jew has become A member in the British Parliament which is A new eary [era?] in the History of the Jews, & they the Jews are gathering home to Jerrusalem by thousands.
What 1848 will bring to pass in the History of the Church and Kingdom of God time must determin And also in the History of the Nations of the Earth. May the LORD hasten the gathering of Israel & the Building up of Zion for Jesus Christ Sake Amen.