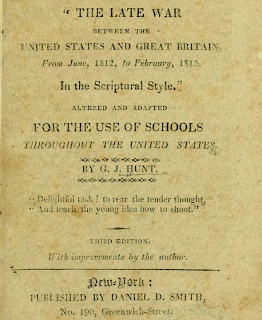 Several studies by Chris and Duane Johnson compared the texts of 135,270 books published between 1500 and 1830 to the Book of Mormon. The authors believe their studies indicate the Book of Mormon is dependent on the book "The late war, between the United States and Great Britain, from June 1812, to February 1815 : written in the ancient historical style" (1816) by Gilbert J. Hunt.

Their study (which excluded the Bible) found Late War to have a highest number of four word phrases in common with the Book of Mormon. The Johnsons used multiple algorithms to confirm their results and have requested peer review of their research.

The wide availability of old texts at various universities, archive.org and google.com have allowed "Big Data" studies to proceed. Details of their study are available here, with further explanation here. (Update: here is a new, detailed page).

An earlier comparison of Late War and the Book of Mormon was done by Rick Grunder, and can be read here. Grunder looks at similarities between the two texts including war between the wicked and righteous, maintaining the standard of liberty with righteousness, reports of battle causalities, righteous Indians vs savage Indians, false Indian prophets, the conversion of Indians, brass plates, the worthiness of Christopher Columbus, ships crossing the ocean, elephants/ mammoths in America, literary hebraisms, use of "it came to pass," "curious workmanship," "chief captains," and others.

At the American Fork cemetery is buried a 21-year-old who took his life because he couldn't handle being gay, according to the note he left. Bryan was a graduate of American Fork High School. He had served an LDS mission and was planning on attending Joseph Patrick Academy of Hair.

--
Elder Nelson. "We will each have a personal interview with Jesus Christ. We will account for decisions that we made about our bodies, our spiritual attributes and how we honored God's pattern for marriage and family."

Excerpts of Small and Simple Things by Libby at the-exponent.com
--
If you thought you heard the words "Some feminist thinkers view homemaking with outright contempt, arguing it demeans women, and that the relentless demands of raising children are a form of exploitation," during general conference, be reassured: you aren't losing your mind. You did hear them. Elder D. Todd Christofferson said them in the Saturday afternoon session. But when you go to read the talk in the Ensign, the words "feminist thinkers" won't be there.

Elders Uchtdorf and Holland on doubt and mental illness

Excerpts of Uchtdorf urges questioning Mormons to return by Peggy Fletcher Stake, Salt Lake Tribune
--
It is wrong to assume that Mormons who leave the faith "have been offended or lazy or sinful," a top leader told members Saturday during the LDS Church's 183rd Semiannual General Conference.

"It is not that simple," said Dieter F. Uchtdorf, second counselor in the LDS Church's governing First Presidency.

Some struggle with "unanswered questions about things that have been done or said in the past," Uchtdorf explained. "We openly acknowledge that in nearly 200 years of church history — along with an uninterrupted line of inspired, honorable and divine events — there have been some things said and done that could cause people to question."

"To be perfectly frank," Uchtdorf said, "there have been times when members or leaders in the church have simply made mistakes. There may have been things said or done that were not in harmony with our values, principles or doctrine."