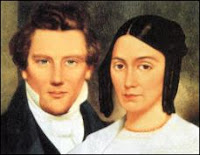 Perhaps one of the most controversial yet interesting topics in LDS history is the origin of Mormon polygamy.  Joseph Smith practiced it secretly and introduced it to some of his closest followers.  But tensions surrounding its practice eventually led to the murder of the Latter-Day-Saint Prophet.

Today, discussion of polygamy is avoided in official church discourse, and it is considered impolite to ask about it in Sunday School.  The church continues P.R. efforts to remove the uncomfortable association between the Church of Jesus Christ of Latter-day Saints and Mormon fundamentalism.  Meanwhile, critics use the topic to undermine the church, leaving many church members unsure what to believe, or where to go for reliable information.


Wednesday's presidential order to the Justice Department to stop defending the Defense of Marriage Act, the 15-year-old law which bars the federal government from recognizing same-sex unions, represents not only a major change in policy for the White House, but also a new wrinkle in the unfolding drama over the legality of California's Proposition 8.
Read more »
No comments:

Excerpts of Hawaii eyes gay ceremonies after civil unions pass, Associated Press
--
Hawaii lawmakers gave final approval to civil unions Wednesday and sent the legislation to Democratic Gov. Neil Abercrombie, who plans to sign it into law within 10 business days. Civil unions would begin Jan. 1, 2012, making the state the seventh in the nation to grant virtually the same rights of marriage to same-sex couples without authorizing marriage itself.

Excerpts of Witnesses, Adventists outpace LDS growth,  by Kristen Moulton, The Salt Lake Tribune
--
The Jehovah's Witnesses, the 20th-largest denomination, swelled by 4.37 percent from 2008 to 2009 for a total of 1,162,686 members

The Seventh-day Adventist Church grew by 4.31 percent and moved into the top-25 denominations, with 1,043,606 members
The Church of Jesus Christ of Latter-day Saints remained one of the fastest-growing U.S. faiths, although its rate slowed to 1.42 percent, according to the new yearbook.
The LDS Church reported
Read more »
No comments:

Excerpts of Playing Valentine, by Melany S., Doves and Serpents
---

...In 2008 I found myself between a rock and a hard place in terms of the Prop 8 debate. As the church took even greater strides to make this constitutional amendment a reality, I believed my silence to be approval and felt compelled to speak up for my gay brothers and sisters

Unprotected Texts: The Bible's Surprising Contradictions about Sex and Desire

Reviewed by Richard Packham for the Association for Mormon Letters

** WARNING: Due to the nature of the subject matter, this review, like the book being reviewed, is likely to be considered by some as R-rated

The Text of the New Testament: Its Transmission, Corruption, and Restoration

"...there is a wealth of masterful scholarship to recommend to a Mormon audience, even the more conservative members therein.  The authors are appropriately reserved in their judgments, always seeking to illuminate, never to point accusatory fingers.  Reading [the book] left me amazed"

Title: The Text of the New Testament: Its Transmission, Corruption, and Restoration

Transformation of the Mormon Culture Region

Commonality and Cooperation between Abrahamic Faiths

The eleventh annual UVU Mormon Studies Conference will engage in a comparative exploration of Islam and Mormonism.  Scholars and practitioners will reflect on points of connection and contrast between two traditions that face challenges related to public awareness and social inclusion.  This two-day event will explore a variety of issues for Mormons and Muslims including 1) religious freedom and public perception, 2) mutual goals and cooperative endeavors, 3) areas of theological connection and divergence, and 4) efforts at dialogue and bridge-building.

Society for Mormon Philosophy and Theology Eighth Annual Meeting
April 7–9, 2011
Brigham Young University
Provo, Utah
The Society for Mormon Philosophy and Theology invites papers on any aspect of Mormon belief, including its philosophical ramifications. We particularly encourage submissions on this year's theme.
Theme: "Serving God with Our Minds—The Place of Philosophy, Theology, and Scholarship in a Prophetic Church"
Read more »
1 comment:

Is the Bible a scientific textbook?

Excerpts of Is the Bible a Scientific Textbook? by David H. Bailey, sciencemeetsreligion.org
--
For the majority of Judeo-Christian readers of the Bible, modern science poses no fundamental challenge to religion in general or the Bible in particular. Such readers are able to view the Bible as the inspired word of God and yet retain sufficient flexibility to accommodate modern science. At the least, they are willing to accept that the Bible was not intended to be read primarily as a scientific textbook, and that eventually both perspectives will be seen to be part of a unifying truth.
But others in the Judeo-Christian world see significant issues in this arena. For example,

Oaks on the deterioration of religous rights

The Christian Imagination: Theology and the Origins of Race

Title:  The Christian Imagination:  Theology and the Origins of Race

The thesis of Willie James Jennings "The Christian Imagination" is not just provocative, but shocking: Christian theology and practice created the necessary conditions for racism and slavery.  Or, more subtly:

About a dozen events will be posted each day over the next 6 months, drawing from about 90 sources including historical works, LDS church materials, the diaries of Joseph Smith and associates, sermons, minutes, etc...

Mormon-Church-History is available through a number of formats:

Need some meat to go with that milk?  This year's Sunday School lesson topic covers the New Testament.  Here is a nice, free course from Yale University (also available through iTunes university).

Excerpts of 2012: The Year of the Mormons? By Stephen Stromberg, Washington Post
--
Will America see a Mormon GOP presidential nominee after all? Some conservatives are already looking around for the not-Mitt-Romney candidate -- which is ominous for the former Massachusetts governor's inevitable run. But the White House now expects that Jon Huntsman, America's ambassador to China and the former governor of Utah will [prepare] for a 2012 presidential campaign.

Huntsman has many of the attractions of presumed front-runner Romney