Excerpts of Marriages dissolved, sexual relationships banned among FLDS faithful, KSL news.  The FLDS church is a Mormon sect that continues to practice polygamy.  They broke off from the LDS church in the early 1900s after the LDS church banned polygamy. Copies of revelations from Jeffs are being sent to LDS meetinghouses.
--

...followers of Warren Jeffs await the apocalypse he has predicted, they're living under a challenging edict: they're forbidden to have sex until Jeffs is sprung from a Texas prison.

"He has predicted that the walls in the prison where he's at will fall and crumble," said Joni Holm, who has many relatives in the polygamous FLDS faith.

Review: "Re-Claiming the Bible for a Non-Religious World"

John Shelby Spong's reputation rests (or should rest) not only on his achievement of having published over twenty books on religion and the Bible, but also on the fact that he has risen to high rank in his church (Episcopal bishop of Newark, New Jersey for twenty-one years until his retirement) despite religious beliefs and attitudes toward the Bible that would have had him burned at the stake as a heretic only a few centuries ago. Even in our modern and supposedly more tolerant age, Bishop Spong has received eighteen death threats. All from Christians.

The present volume continues the themes of Spong's previous books. In his writings, he claims (and "re-claims" here) that 1) the Bible is a great and valuable book; 2) most Christians are quite ignorant about the Bible, confining their knowledge of it to their Sunday school stories and the passages frequently quoted in their pastor's sermons; 3) the Bible is not - and should not be considered as - the "Word of God"; 4) the Bible is mis-used when cited to justify injustice or cruelty, such as genocide, slavery, second-class status for women, or discrimination against homosexuals.

Simon Southerton on DNA and the Book of Mormon

Publications by Simon Southerton and Thomas Murphy led to a so-called "Galileo moment" regarding DNA and the Book of Mormon. Genetic studies demonstrated that Native Americans were not primarily descended from the Middle East as had been assumed by most members and leaders of the church.  Apologists responded, suggesting the Book of Mormon should be read with the assumption that a larger indegenous population was already here when Book of Mormon peoples arrived, and that DNA evidence of Middle Eastern descent was washed out by breeding with the indigenous population.  The church subsequently clarified the introduction to the Book of Mormon to accommodate this view.

Simon Southerton has begun publishing updates about DNA and the Book of Mormon.

Mormon polygamous sect: must be 'chosen' by year's end or be destroyed

Excerpts of FLDS must be 'chosen' by year's end or be destroyed, Jeffs says, by John Hollenhorst, KSL News
--
A "frenzy" of activity has erupted among a polygamist community in southern Utah as imprisoned leader Warren Jeffs has told his followers that they must be "chosen" by the end of the year or be destroyed.
According to outside observers, there has been a flurry of church meetings almost daily, a set of mysterious construction projects and widespread re-baptism as thousands of followers react to apparent prophesies of doom from their imprisoned leader.

An important new book, The Nauvoo City and High Council Minutes makes available for the first time the minutes of the city and church high councils from the Mormon city of Nauvoo, Illinois, 1839-1845.  The minutes were edited into book format by John S. Dinger, assistant district attorney in Boise, Idaho.

He was kind enough to answer a few questions about the book:
--

Clair Barrus: Can you provide a description of the contents of the book, I.E. what documents are included, what time frame do they span, where did these councils fit into the leadership hierarchy of Nauvoo.


John: The book contains the records of two of the governing bodies in Nauvoo; the City Council and the High Council.

SNL Insight on answers to prayers, and the true church

Rethinking Retrenchment: Course Corrections in the ongoing Campaign for Respectability

Sociologist Armand Mauss has written an important "update" on the continuing evolution of the modern church.  His article in the most recent issues of Dialogue: A Journal of Mormon Thought summarizes his views of LDS church assimilation into the greater culture as presented in his 1994 book The Angel and the Beehive: The Mormon Struggle with Assimilation. He describes periods of assimilation into the greater American religious culture, interleaved with periods of retrenchment that differentiate the Mormon church from other religions. Periods of retrenchment emphasize differences between the church and society, while periods of assimilation focus on commonality and deemphasize differences.

Excerpts of Gender gap widening among Utah Mormons, but why? by Peggy Fletcher Stack, The Salt Lake Tribune.  See here where a BYU researcher questions this survey.
--
A new survey shows Mormon women outnumber men in the LDS Church — and the gap appears to be widening, especially in Utah.

James E. Talmage investigation of the Dream Mine


In the 1880s, John Koyle started having dreams about lost cattle.  Later, his fellow missionaries felt he had the ability to prophesy.  He continued to have dreams about world affairs.  Many Latter-day Saints believed his predictive dreams were being fulfilled, and his reputation as a visionary spread.

Koyle said a heavenly messenger told him of an ancient Nephite gold mine near Spanish Fork, Utah in 1894.  He was given detailed instructions how to mine the site, and was told the mine would aid in the relief of his people during a time of world-wide crisis. In 1910, Koyle was appointed bishop of a ward in Spanish Fork.

Trained geologist and apostle James E. Talmage visited the Relief Mine in 1913 and  reported his is findings to the First Presidency and Quorum of the Twelve. Some in the church heirarchy believed in Koyle's abilities, while others felt he was deluded. 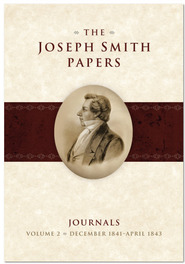 Excerpts of Thoughts on the introduction to the new JSP Volume: Journals Vol. 2 (1841-43) By: Ben Park, Juvenile Instructor
--

...The Joseph Smith Papers just released the most recent addition to their foundational series. Journals, Volume 2 (1841-1843) ... I just want to comment on a single section of the introduction; in fact, only about seven pages of the introduction....  in a little over twenty pages, they had to update their readers on what happened between 1838 (when the last Journals volume ended) to when Willard Richards became Smith's journal keeper in December 1841 ...  about a third of the entire introduction—of discussion on the origin, documentation, and controversy over polygamy. And it's not just the length of the discussion that's surprising, but also the content.

Excerpts of FAIR changes Mormon defenders website name by Joseph Walker, Deseret News
--
"The Mormon Defense League" is out. "MormonVoices" is in.
That change became official ..., when the Foundation for Apologetic Information and Research announced a name change for its website aimed at defending the teachings and practices of The Church of Jesus Christ of Latter-day Saints.